ALL PRODUCTS
Via In Pad
Home/Technical

The use of Via-in-Pad technology is increasingly influenced through the necessity of high-density BGAs (ball grid arrays) and the miniaturization of SMD chips.

With a reliable Via Filling / Capping process, without enclosures of chemicals, it is possible to produce high-density PCB designs with Via-in-Pad technology, avoiding soldering errors.

Via in pad guidelines 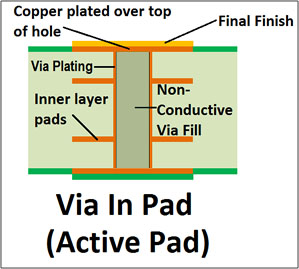 It is suitable for small BGA via in pad.

This process fill the via hole with a conductive or

Nonconductive material and then the via surface is plated over，

TIP: A common misconception is that a non-conductive fill will either not pass any or only a very weak electrical signal through the via. This is not true. The barrels of the vias will still be plated with copper the same as any other via on the board, the only difference is the empty air in barrel is replaced with the fill material. This is usually done to prevent solder or other contaminants from entering the via or provide structural support for a copper pad covering the open hole in the case of a Via In Pad. 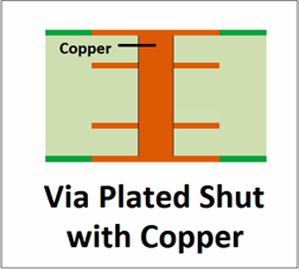 According to IPC, a microvia is a hole with a diameter of < 0.15mm.

It can be a through via hole (with all respect to a aspect ratio),

But we normally see them as blind vias between 2 layers.

Mostly drilled by laser but some pcb manufacturers are also drilling microvia with a mechanical drill bit.

It is slower, but the holes have a clean and nice cut.

The microvia copper fill process is an electrochemical deposition Process applied in the manufacturing of multilayer process,

The process is complex. Copper filling of microvias is available from most PCB manufacturers that are capable of producing HDI PCB Boards.