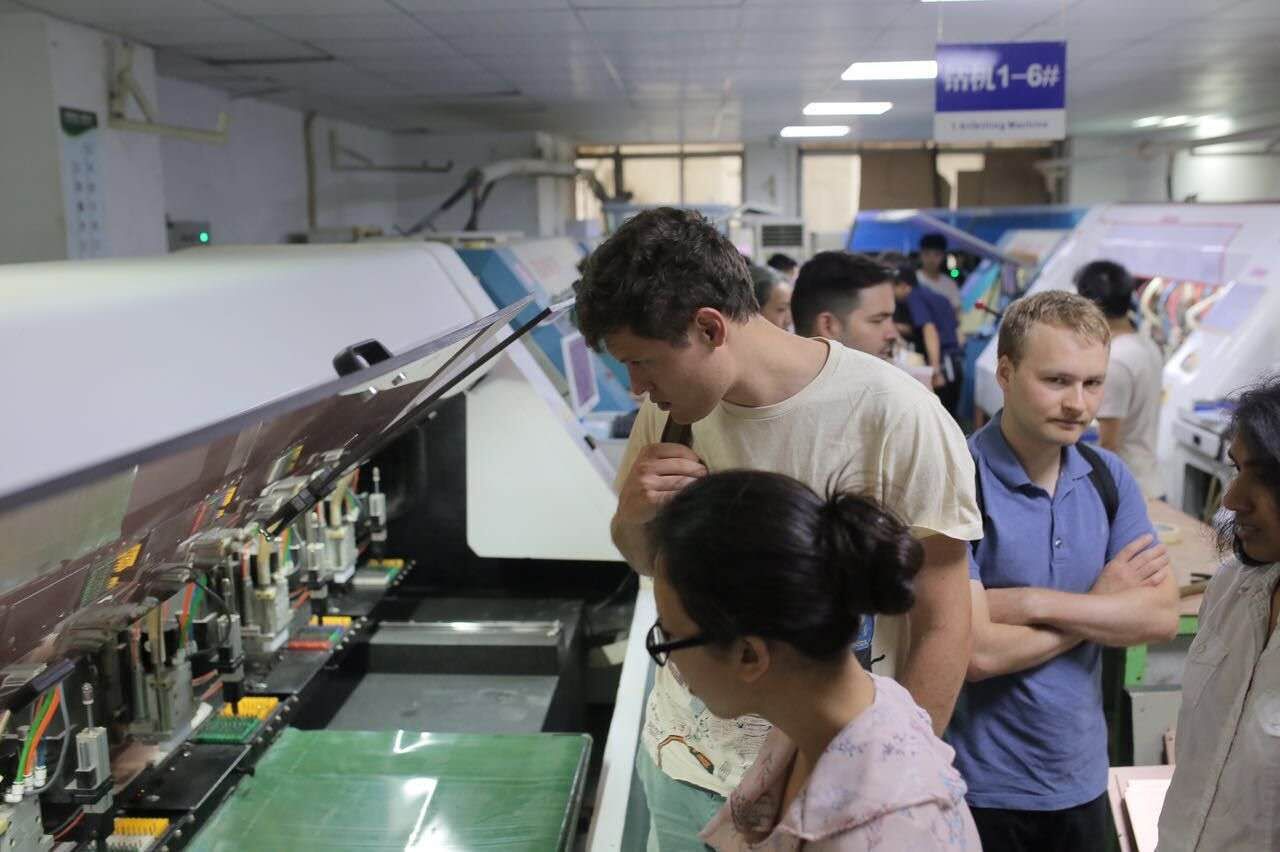 Since 2013, members of the MIT Media Lab community have set out from their research groups every summer to observe work in ten or so factories in China. This year, we went with a different approach: not just to visit but also to collaborate on experimenting and co-operative design with two facilities in or near the city of Shenzhen.

During the Hacking Manufacturing summer course this August focused on the theme of “Soft Robotic Materials,” we three instructors and seven Lab students worked with a digital knitting factory called K-Tech and a flexible printed circuit board (FPCB) manufacturer called King

Shenzhen has been the home of the Hacking Manufacturing course since its first year. As a manufacturing hub, it's one of the world’s highest concentrations of factories across many industries. This ecosystem gave us access to diverse knowledge, tools, and raw materials. Also, leaving our comfort zones and living in a new country prompted many new perspectives for us on a personal level.

Today, many people talk about interdisciplinary collaboration. For that to happen, there must be a shared medium and shared context for the conversation to start. For us, the manufacturing processes create both the medium and the context. We all come from different backgrounds—bio-engineering, mechanical engineering, architecture, industrial design, fine art, neuroscience, to name a few. Yet we all share a love of making stuff, with our hands, with machines, and now with factories.

Often the factory is depicted as a place run by machines and automation. Humans are invisible in this picture. But that’s not what we saw in the Shenzhen-area factories: Every piece of a product had its maker, its builder—someone who spent time and effort to fine-tune the machine and to work with the machine to achieve the products people use every day. The most exciting part of our trip was that we got to work with those makers. They have accumulated knowledge, expertise, and skills that aren’t common in a lab—wisdom that only comes from working for years with the machinery and materials in a factory. We believed that by collaborating with them, we could create something amazing in a short period.

Spending a whole month in a factory gave use more than expertise in the manufacturing processes; it also it gave us time to really know the people who work with the machines and find out how the factory operates. We were able to build community and trust with these people. That is, beyond being a source of production capability, the personnel in the factories became our collaborators, so that even now—after we’re no longer physically at the factories—we can continue working and creating together. If we have questions or curiosities to share, our communication channels are open so that we can still pursue these explorations with our factory collaborators.

We selected the Shenzhen-area factories based on the following criteria: first, they’re open to working with researchers; second, they include some degree of manual work that allows for fast modification of the processes because, if factories are fully automated, there’s less room for researchers to change and remix without breaking the machines. While we course instructors were split between the two factories, the students were free to go to either one depending on the nature of their projects.

The King Credie factory, in the Bao'an district of Shenzhen, focuses on the final steps of flexible printed circuit board (FPCB) manufacturing: silkscreen, coverlay lamination, and reinforcements. FPCB manufacturing interested us because flexible electronics are popular in human-computer interactions (HCI) research and are featured in multiple HCI projects. This manufacturing process is similar to the usual rigid PCB manufacturing process. The main difference is that, instead of rigid underlying layers of fiberglass (FR-4, for example), King Credie uses a thin polyimide plastic film. Furthermore, the facility does automated circuit board testing and assembly using automated pick-and-place machines. The exposure, etching, and laser cutting is done in a separate location, and we moved between the two. We found some manufacturing steps to be particularly easy and interesting to modify. For example, since coverlay is laminated into the circuit board using a heat press, we discovered that we could sandwich various materials between the coverlay and the circuit, thereby creating flexible printed circuit boards with materials, such as leaves and paper, embedded into them. This discovery became a foundation for our various projects on the trip.